My mother's brother, uncle Cyril and his wife, my auntie Mary, lived in Orpington. In Goddington Lane if memory serves. Their two sons, Michael and John, both went to Oxford University. My father used to hold them up as an example for me to follow, but I didn't want to go either to Oxford or Cambridge because I wasn't all that study orientated. It was unlikely that I would have got in anyway, but their entire ethos put me right off. My best friend in Lancaster at the time failed to get in to Downing College, Cambridge, but was offered a place at Fitzwilliam, which he accepted. Personally I was far more comfortable at Birmingham University because I didn't feel under the kind of pressure that my friend had to deal with, and there were four first class football teams within easy reach, Birmingham City, Aston Villa, West Bromwich Albion and Wolverhampton Wanderers. In my obligatory weekly sports class, I chose football, and my coach was Bill Slater, captain of Wolves and England during my time there. How far would I have had to travel from Oxford or Cambridge to watch a First Division game? Miles!!!!!
Top

Kashgar wrote: ↑
13 Sep 2019, 16:41
'I now only have 114 issues missing from the full run' sounds like you're getting the thrill of the hunt in your nostrils, Derek. Next you'll be telling yourself I'll just try to get that number into double figures!

That's one way of looking at it, Ray, but my real aim is to have enough instalments of all the stories that will feature in my two proposed books without my having to leave some worthy serials out, nor to feel obliged to go up to the British Library in London just to read missing episodes from stories that have already made the cut, so that no part of any of my synopses will be even remotely misleading. I have, of course, got notes that I made on many previous visits, but not all of them are going to be sufficient. For example, I spent a couple of hours this morning reading through notes that I had made a couple of years ago on The BLUE BIRD, and noticed that I had often summarised completes, notes that will be of minimal help where BUNTY AND HER SISTERS is concerned, in which I will be writing 3-line synopses of serials.
Top

Maybe it's just me Derek. I think that if I had 2135 issues of Bunty and only 114 to acquire I would certainly be more than a little excited about the possibility of completing the run regardless of the usefulness of some of those issues to enhance my researches or not. I'm also more than a little impressed by the fact that someone who sort of 'stumbled' into the collecting of the Thomson girls papers as a research tool towards his extended knowledge of the company's boys papers has amassed such an authoritative collection of same.
Top

Phoenix wrote: ↑
13 Sep 2019, 14:30
'I now only have 114 issues missing from the full run' sounds like you're getting the thrill of the hunt in your nostrils, Derek. Next you'll be telling yourself I'll just try to get that number into double figures

Sorry about the delay in replying, Ray, but this afternoon I took Lois and Alex plus Lois's friends, Faye and Emily, to the indoor swimming baths in Penzance, and then this evening Lois, Alex, Russ and I went to the Copperhouse for a couple of jars and several games of snooker. Since getting home, I've spent most of my time reading. I'm not at all bothered about getting the number of issues of BUNTY down to double figures before writing my book because I already have a list of the stories from all eleven titles for girls that will feature therein. The only matter that isn't completely set in stone is whether to vary the length of the summaries depending on the content and complexity of the individual stories, which will obviously impact significantly on the final layout.
Top

I didn't know you played snooker. I'm a fair pool player. I joined Rileys last year and occasionally pop in for a practice session. I have no one to play with sadly.
Top

I didn't say I was any good, Steve. I can see the correct shots but quite a lot goes wrong from that point. Russ is a reasonable player and Alex is definitely learning steadily, but doesn't yet take the game seriously.
Top

I like snooker. I once potted five balls in a break and did a lap of honour.
Top

I play one of those pool games on my tablet. Yesterday I potted all seven of my balls and the black in one minute eleven seconds!
Top

Back from a weekend at Ingoldmells, kept a look out for any comic related items and was surprised to find this large 300 odd page King features book for £6 (see pic) in one of those holiday bargain stores .They had at least three copies and I had no hesitation buying this one.
A 10 min ride into Skegness and I found two 1966 20 page Playhour colouring books priced 20p each( as shown )from an antique shop .Since the seller valued them at a small price I suppose they are hardly worth collecting and yet the fact they have lasted 53yrs gives them a lot of merit to me.On the backs they advertise Playhour comic at 7d every tuesday. 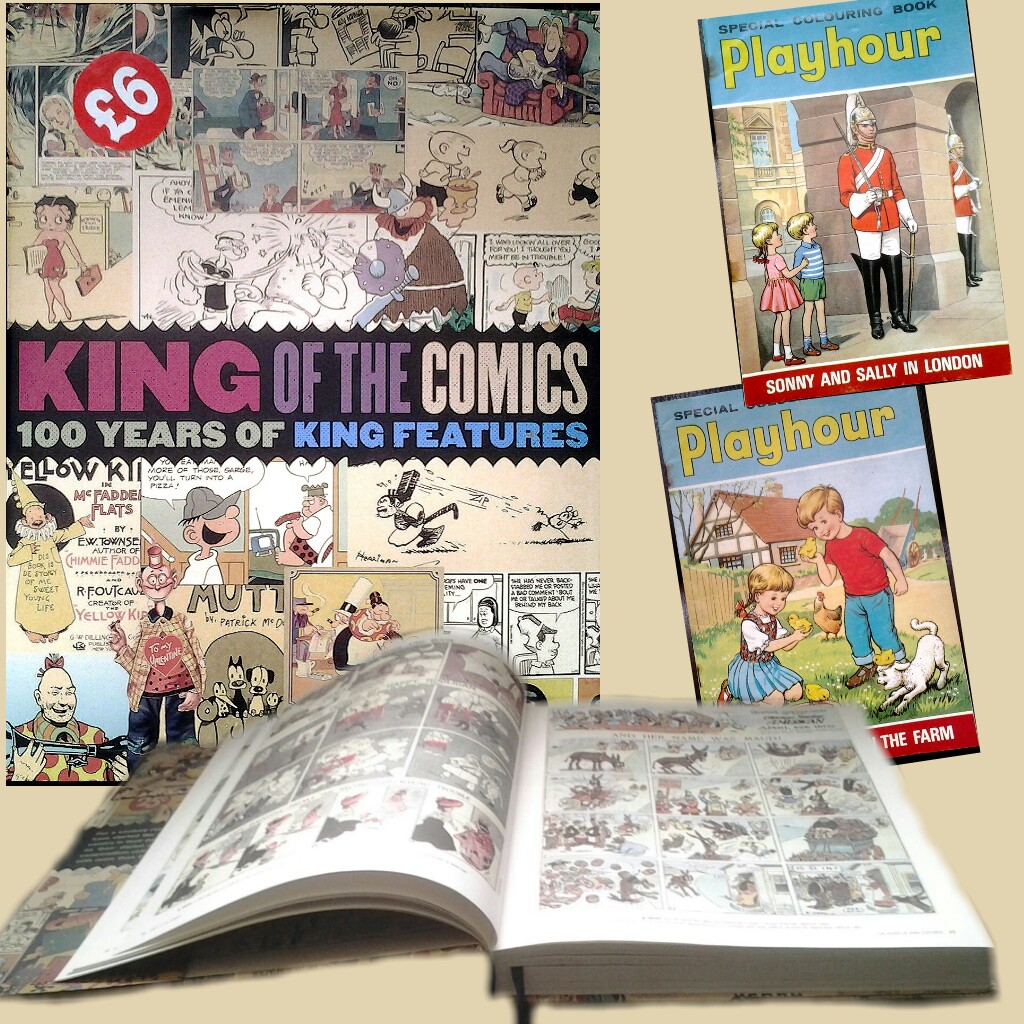 Went to Deptford flea market and Mandy's stall had boxes full of comics. Glad to say they were mostly Victor, Warlord, Battle and UK Marvels (glad because I wasn't interested so didn't have to spend hundreds of pounds). But on top of the stall were Gold Key and DC Tarzan and Kodak Son of Tarzan comics which I bought 35 of. I also bought seventeen issues of Cracked from the early eighties. All £1 each. The Gold Key Koraks were from the 1960s with painted covers and the DC Tarzans were 100 pagers - four of them.
Top

Picked up the latest issue of comic scene I thought I would give it one last try, that was the last try was very disappointed it’s no comic world or any of the other uk based Comic related magazines. I really tried to like it but at £5.99 for only a few pages of interest to me sorry no more.
Top

Four issues of Commando to take me to four to find, 1978 Battle Annual, a random 2 dozen girl picture libraries, 14 Micron Picture Libraries from issue 14 to the 200s, Wild West annual from the 1950s, the complete run of Garth Ennis' Battlefields and a signed copy of the hardback El Mestizo from Alan Hebden.
I started to say something sensible but my parents took over my brain!
Top

Got from eBay a rare British reprint a A4 ish size softback book Batman album no2 from about the mid 60s with a number of b/w Batman stories to me look late 50s to early 60s nice copy for £5, just need to find no1 for a similar price

Just going through the comics I picked up from the Swapmeet and I find that I have doubled my colection of Micron Combat Library by picking up Issue 70. Looking around the interweb thingy and I find that these text libraries lasted to at least issue 76. The one other fact I can add from the indicia is that they were published on the fifteenth of each month.

Does anyone know the definitive final issue? Or any additional information on these text libraries which appears to be the last hurrah of this format?
I started to say something sensible but my parents took over my brain!
Top
Post Reply
7227 posts