A thread devoted to this most versatile and characteristic D.C. Thomson artist. On your marks, set, go!

Is it weird to have no interest in keeping or collecting free gifts?

I often thought that Dave Sutherland was the most multi-talented and accomplished comics artist in UK comics history: Ken Reid and Dudley Watkins undoubtedly struck a wider chord with their natural drawing styles, but for sheer versatility, Dave's impeccable draughtsmanship covered the full gamut of comics styles----from David Lawesque Dennis to the polished craftsmanship of Billy the Cat-------


I regard myself as being fairly savvy in recognizing artists styles, but it was only fairly recently I finally tumbled he done a lot of the Billy the Cat material,something I never even recognized first time around, his style is apparant to me on this work now, but I was completely fooled for a long, long, time........
Baby Boomer Blog:

What I find amazing is he still drawing them very well today...he has kept his standards up..

I like his Dennis and the gang era..
He also draws the best Gnasher..
also he has done some brilliant Beano annual covers in the past..and even recently with the Bash street kids annual..

love to meet him one day..

I must admit that I did Dave a disservice for many years by confusing his early work with that of Leo Baxendale. The fact is that my fondest memories of the Bash Street Kids had always been the earliest colour Beano centrespreads I read circa 1962-4; and since I dated Leo's defection from DC Thomson to the launch of Wham! in June 1964 it seemed logical to assume that he'd been responsible for the majority of these. It wasn't until years later that Kashgar pointed out to me that Baxendale actually left the Beano in July 1962, and that Dave's time on the strip dated right back to the very first 'Bash Street' strip to appear in colour.

If anything I was even more surprised to discover that 'Danny on a Dolphin' and 'The Great Flood of London' had also been the work of Sutherland and not Paddy Brennan. As Dishes says, Dave really does deserve more credit for his astonishing versatility - not to mention the major contribution he's made to the histories of some of British comics' most iconic characters. (In a way he has a lot in common with John Romita Senior who took Spider-Man to new heights of popularity, in spite of the fact that many fans initially dismissed him as a poor substitute for Steve Ditko)

Here's a set from 1967 that nicely demonstrates his versatility by giving Dave the chance to combine his newly-launched character 'Billy the Cat' with the humorous setting of Bash Street. Comparing this with the more 'realistic' Billy the Cat episode which appeared in the same issue I doubt if anybody at the time would have guessed that both strips were being drawn by the same multi-talented individual! I totally agree, I can't think of any D.C.T. cartoonist who's been so versatile and had such a wide range of styles. In the early 1970s, as well as the Baxendale-originated Bash Street Kids and the more realistic, rather Paddy Brennan-esque Billy the Cat, he was also drawing Davy Law's Dennis the Menace and Dudley Watkins' Biffo the Bear. Those are four very different artistic styles, and he was great at imitating all of them. Having said that, I personally thought his Dennis strips got even better once he started to put his own style into it - I can understand why Euan Kerr felt David's 1980s Dennis was too old and thuggish, but personally I thought it was a very strong period for the menace.

It's great that he's still going on strong after half a century drawing the Bash Street Kids, and his Fred's Bed strips over the past couple of years have also been very enjoyable.
'Michael Owen isn't the tallest of players, but his height more than makes up for it' - Mark Lawrenson
Top

The 1980s Dennis has always and always will be my favourite. It contrasted so well with the weedy Walter.
Top

The History of the Beano does point out that David, who was doing Disney posters before joining DCT, imitated other artists on most of his early work, only making them his own style later. As Phil and Jonny mentioned, Danny on a Dolphin, The Great Flood of London, and later adventure strips such as Billy the Cat were all based on Paddy Brennan's style. Bash Street and Dennis initially stayed close to how they were originally drawn by Leo and Davy Law. And Biffo of course, was done in a Watkins style. His versatility is second to none. The only other artist who could turn their hand to both adventure and humour with such ease, was Dudley Watkins, but he never had to imitate predecessors' styles, being the original artist for most of his stories.

Phil, it's funny that you mention Spidey, because without him, neither Billy the Cat nor Fleetway's Leopard of Lime Street would exist - they're both inspired by the webslinger.
Beano and Dandy Comic Libraries and Fun-Sizes list 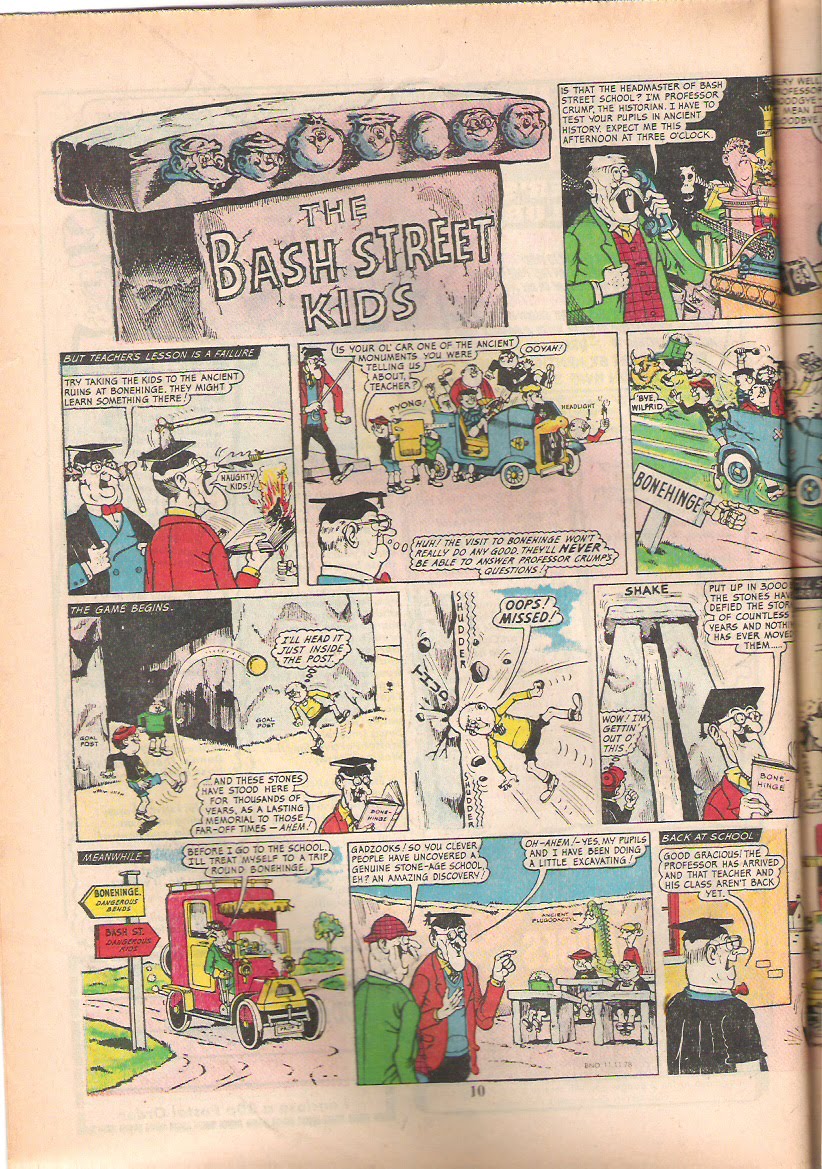 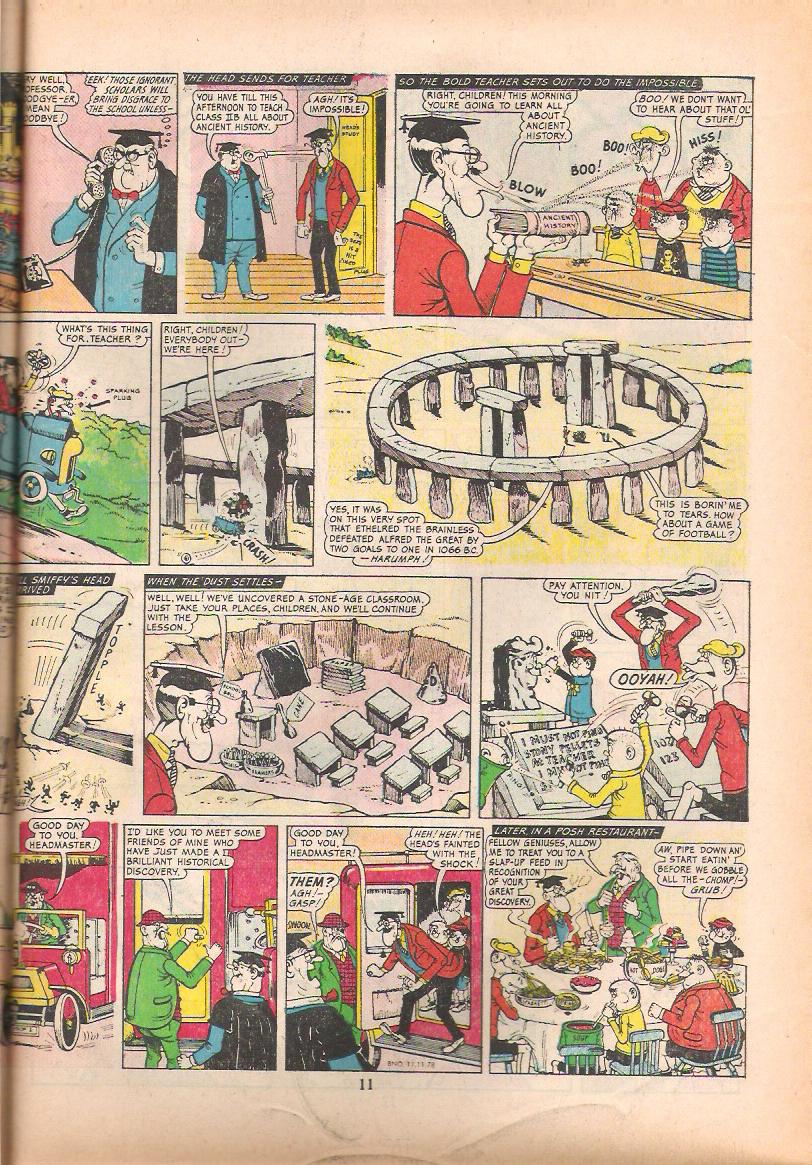 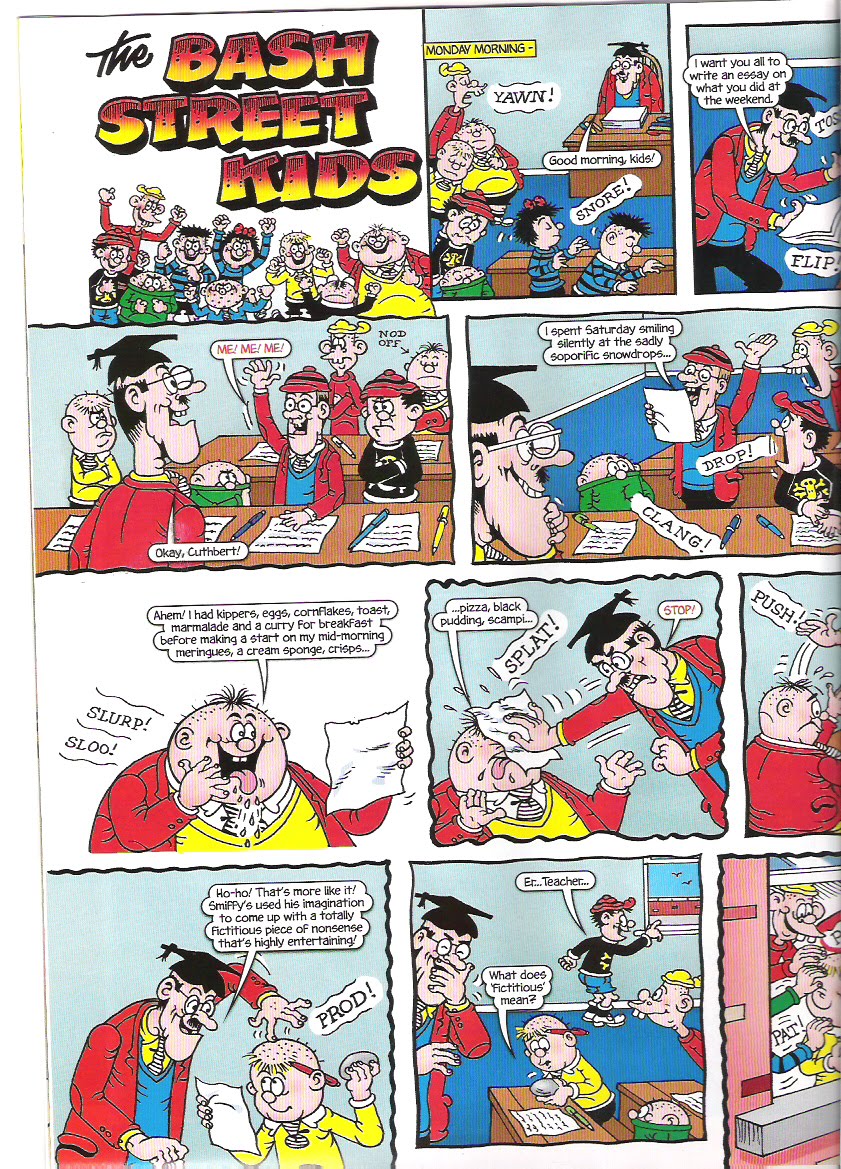 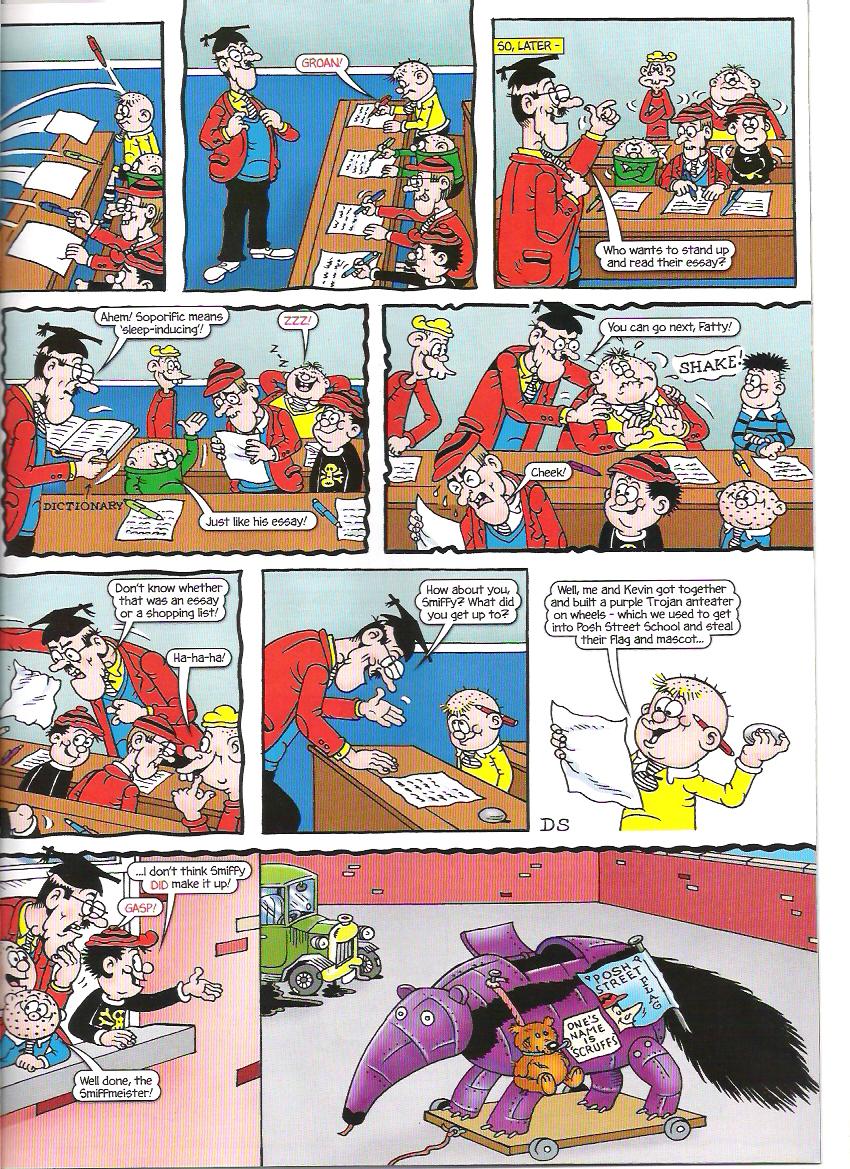 It's such a shame that Britain doesn't produce a heavyweight fanzine like Fantasy Advertiser or Golden Fun anymore. Dave would be a perfect subject for a long, detailed interview that explored his career and influences in depth. Also, since he came to the comics as a second-generation fan who'd grown up reading the Beano himself he'd probably have lots of interesting things to say about virtually all the major artists who ever worked on the title - most of whom were still there when he came on board in the early 1960s.

For that matter, have any of the bloggers out there thought about contacting DC Thomson to see if something along these lines could be arranged for their own website? (I'm sure Comics UK members could think up lots of interesting questions for him to answer!)

I think an interview with David Sutherland would fit much better here on ComicsUK. The people on here are the sort of people who would want to read it. DC Thomson's own site is mostly links to their other sites. It might work on their Beano site though there is a lot of interesting stuff in their retro section and it could fit right in there.

Fantastic detail on those 60s/early 70s-dated Bash Street Kids-----is the second one with the 'stone' theme an early Sutherland effort or a Leo Baxendale effort reprinted, I wonder?

The second one is dated 1962 by Peter which looks accurate going by the style, ----but is seems to be dated from the 70s in the actual strip, so maybe a rerun....
Baby Boomer Blog:

Its a rerun
1978
the whole of the Month November 1978 are these great reprints from 1962..I know they are the early ones has someone on here before showed what a David Sutherland 1962 strip looked like..
I know its by David Sutherland has it is in colour and Leo did two page Bash street in red and black &white only..1961..
Peter Gray's comics blog
http://www.petergraycartoonsandcomics.blogspot.com
Top 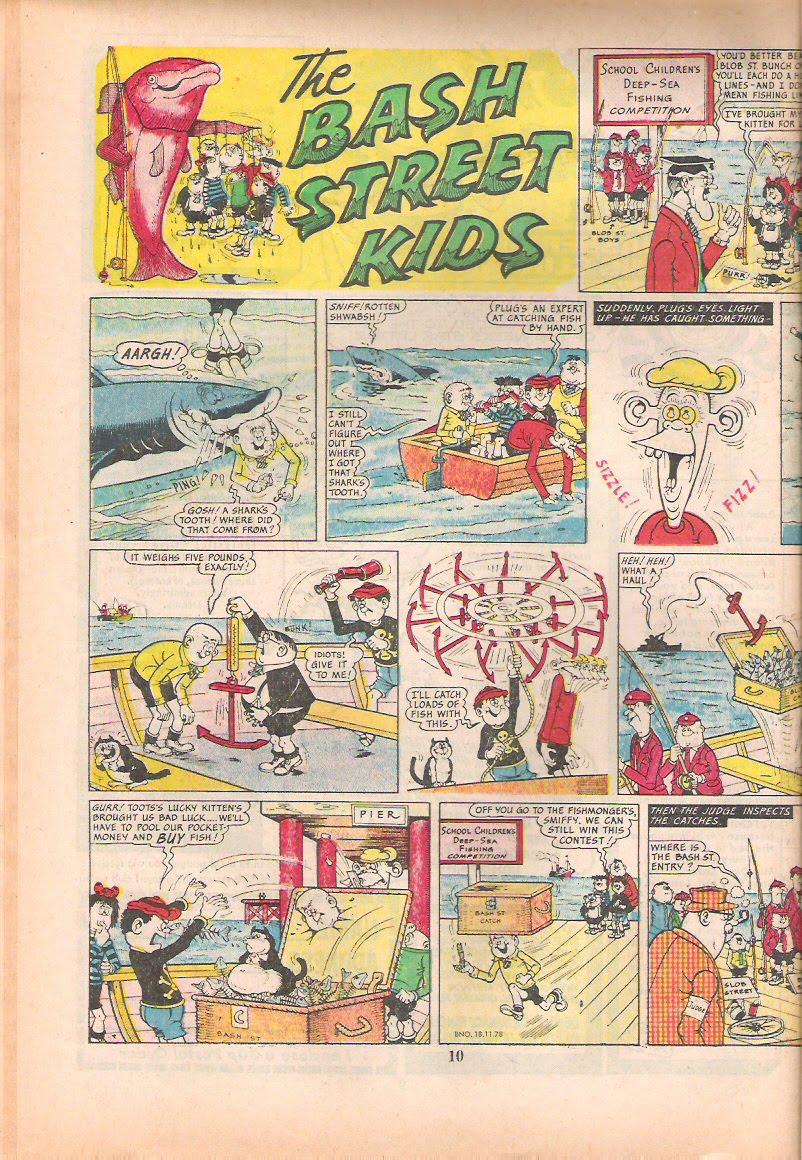 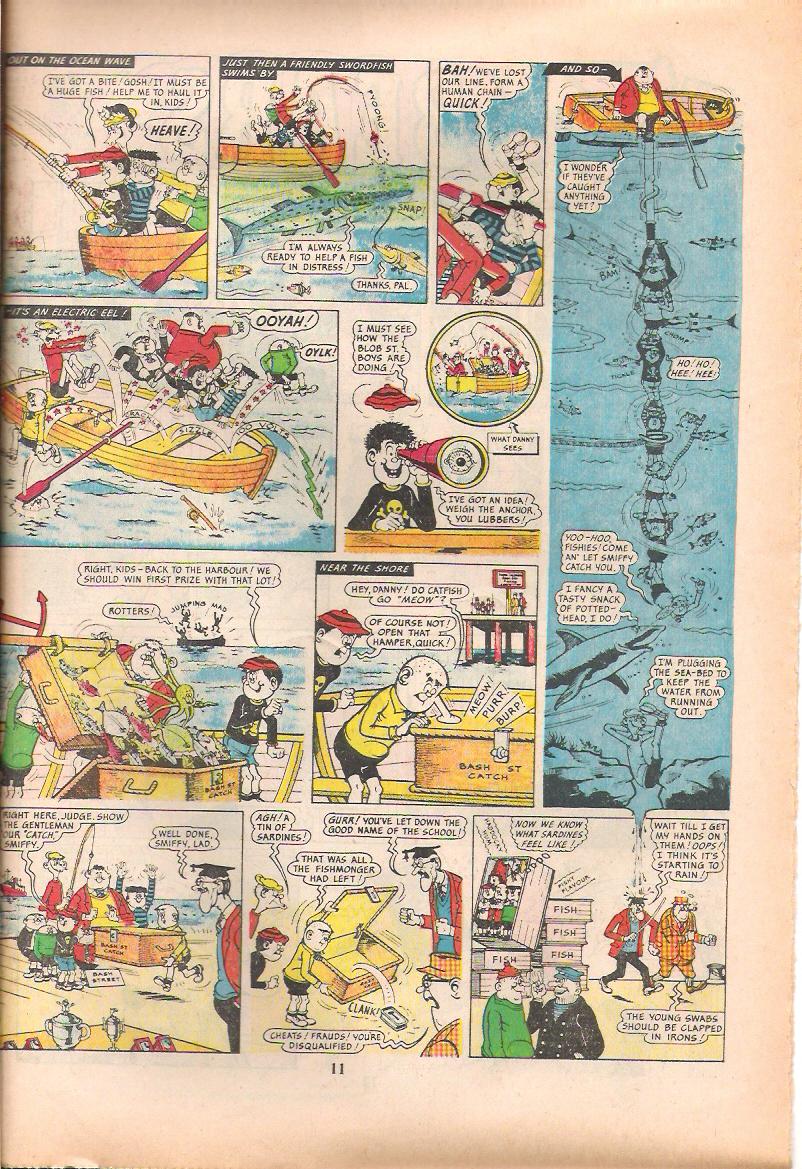 this might be the second one David ever drawn..I seem to rmemeber reading on here.. 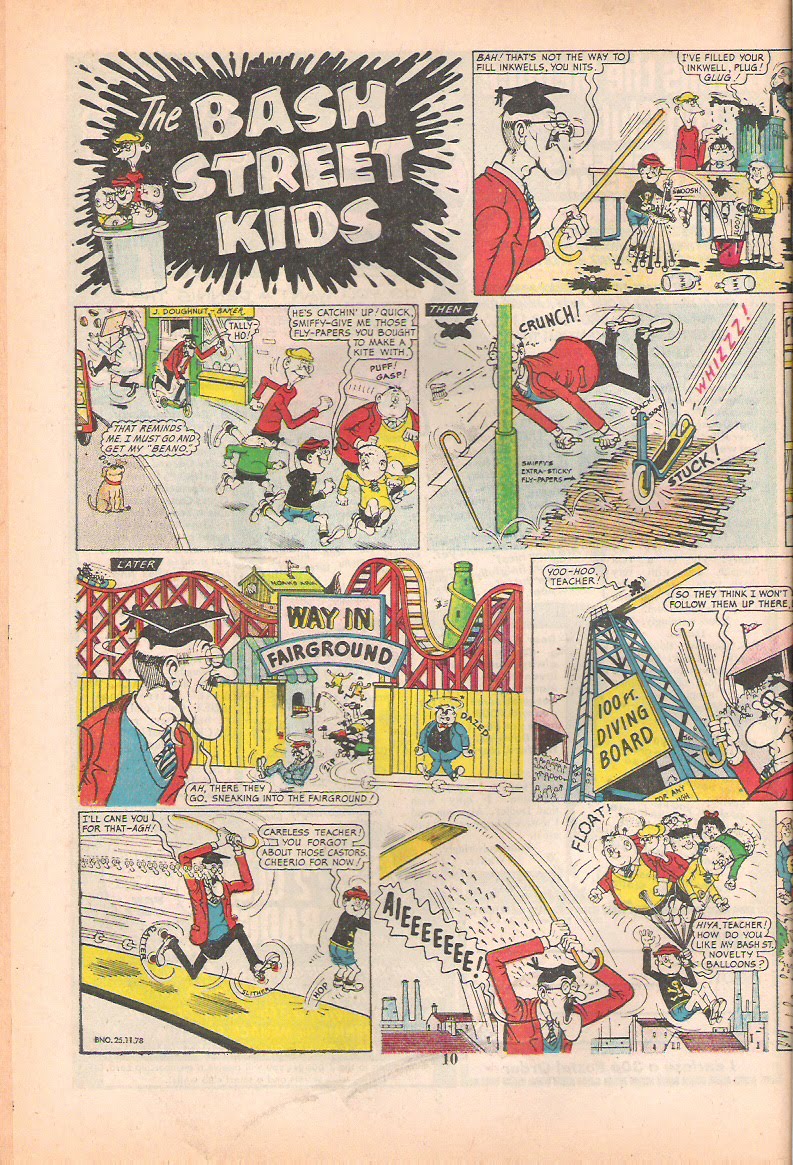 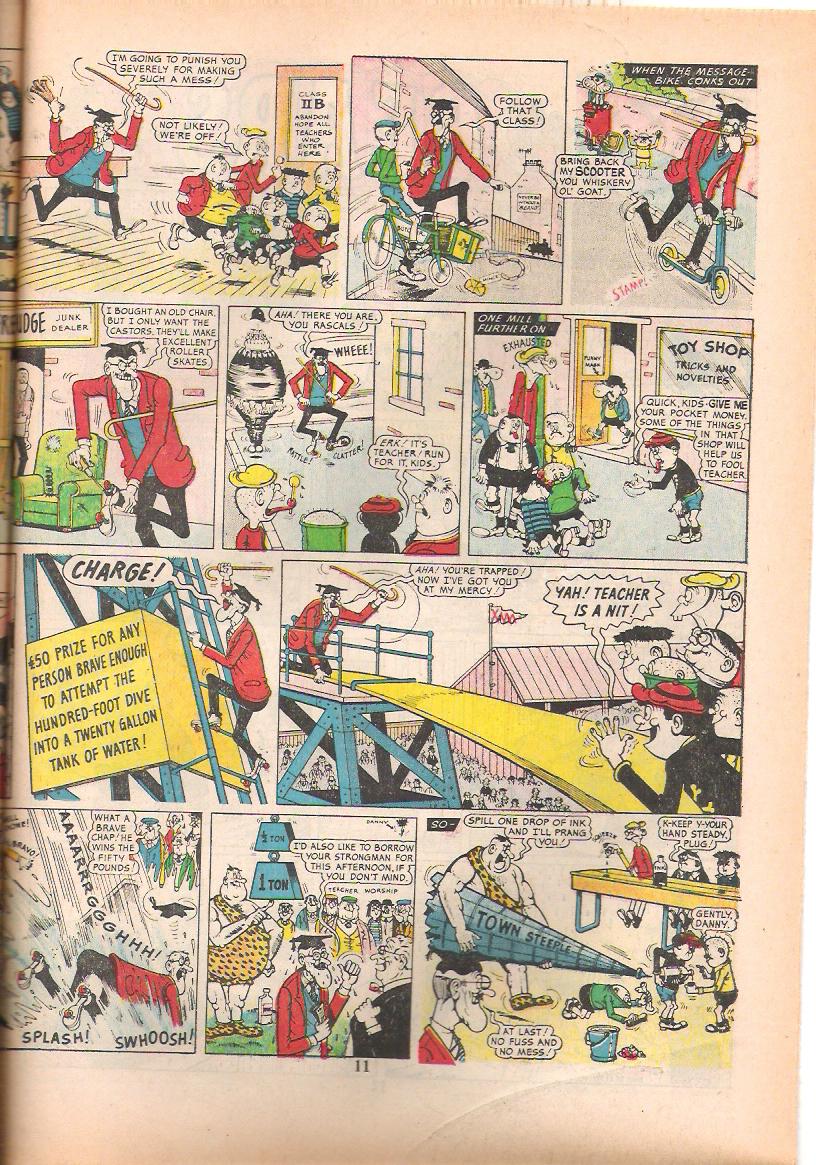 First-class work, by any standards---many thanks for sharing these excellent examples, Peter.
Baby Boomer Blog:

Peter Gray wrote:I know its by David Sutherland as it is in colour and Leo did two page Bash street in red and black &white only..1961..

Dave's first full Bash Street story appeared in the Beano dated 4th August 1962 (presumably that's the one reproduced in The History of the Beano - though they don't say for sure). As Peter says the one with the fish is from the following week, however the previous week's issue is even more historic in some ways as it was the only one to feature both the Baxendale and Sutherland versions together (Dave's first ever panels being added on to the final episode of 'G For Giant' in the centre pages). ...and on the very next pages Dave Sutherland hits the ground running: