good points Phil Rushton
you are right about the different approaches...also Leo didn't mind drawing lots of kids rather than just the nine..I of course loves his busy pages.. 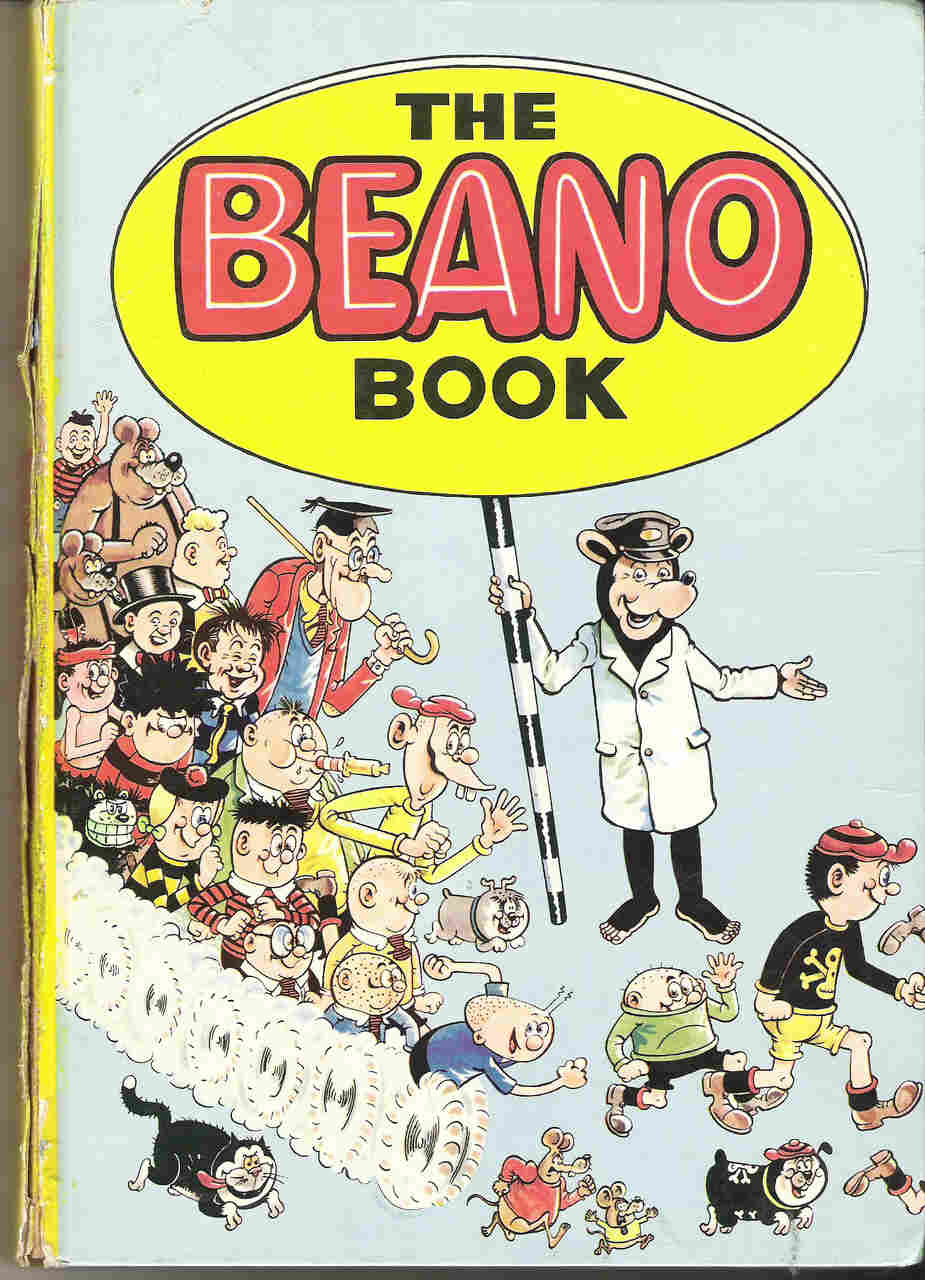 My favourite Beano cover by David..loved the eyes having colour..a nice painted effect..


I remember the ship one with the cannon balls f;ying around everywhere which was from 1962 and was shown on here and I was sure it was by David Sutherland But Nigel P put me straight and said it was Leo...it was one of the red and black and white two pages ones..so it can be tricky to tell sometimes..
Peter Gray's comics blog
http://www.petergraycartoonsandcomics.blogspot.com
Top

Thank you all for your thoughts and knowledge and wonderful art samples. I had intended to add more scans of my own, but I don't think I have anything that can match what has been shared so far.

The Great Flood Of London is superb.

I grew up with the 1980's Dennis and I love that robust era of the Menace too.

Peter just beat me to it in pointing out that Sutherland taking over the Bash Street Kids seems to coincide with the number of pupils in class IIb shrinking suddenly. Maybe the parents of the other kids moved away to get their darlings away from Danny & co.'s baleful influence.

Yes, in those early Bash Street Kids episodes Mr Sutherland inserted so many wonderful incidental sight gags, just like Baxendale, Paterson, and Geering at their best. Witness in one of the strips above the Headmaster secretly using Teacher's tears to water a plant. I wonder how many of these were in the original scripts.

One of my favourite comic books ever was and is the Bash Street Kids book 1982 (the second one) which was my first glimpse at reprints of that glorious era of the strip. Those strips repay rereading and rereading and gazing at in wonder. The fact that there is only one Leo Baxendale (my favourite UK comics artist too) doesn't lessen Mr Sutherland's achievement.
It took me a while as a kid to figure out if those strips were drawn by the same artist as the ones appearing in my weekly 1980's Beano. I was surprised when I found out they were.

It's maybe poor form to link to something only to disagree with it, but I vehemently disagree with this writers assessment of David Sutherland (or of David Law, for that matter):
http://www.paulmorris.co.uk/beano/artis ... erland.htm
Particularly this phrase: "Whether David Sutherland ever had a distinctive style of his own I may never know."
His work of the 80's and onwards is definitely in his own distinctive style. As the writer himself admits, the Bash Street Kids and Dennis the Menace no longer looked like they were drawn by two different people. In other words, they no longer looked like they were drawn by Baxendale and Law, they both looked like they were drawn by David Sutherland. Just because his style evolved from Baxendale/Law pastiches, and just because it's not a style the writer admires, doesn't make it any less distinctive in the end. And once you're aware of his style, it's easy to spot the similarities in one of his Billy the Cat strips.

How about a complete list of his strips then?

Danny on a Dolphin
The Cannonball Crackshots
The Great Flood Of London
The Bash Street Kids
Lester's Little Circus
General Jumbo
Billy the Cat
Biffo the Bear
Dennis the Menace
Gnasher's Tale/Gnasher and Gnipper
Rasher
The Germs
Korky the Cat
Bradley Bedsock (was that his name?)
Fred's Bed

Any more? And were they all for The Beano except Korky and Bradley?

Long live the Great David Sutherland!
Is it weird to have no interest in keeping or collecting free gifts? 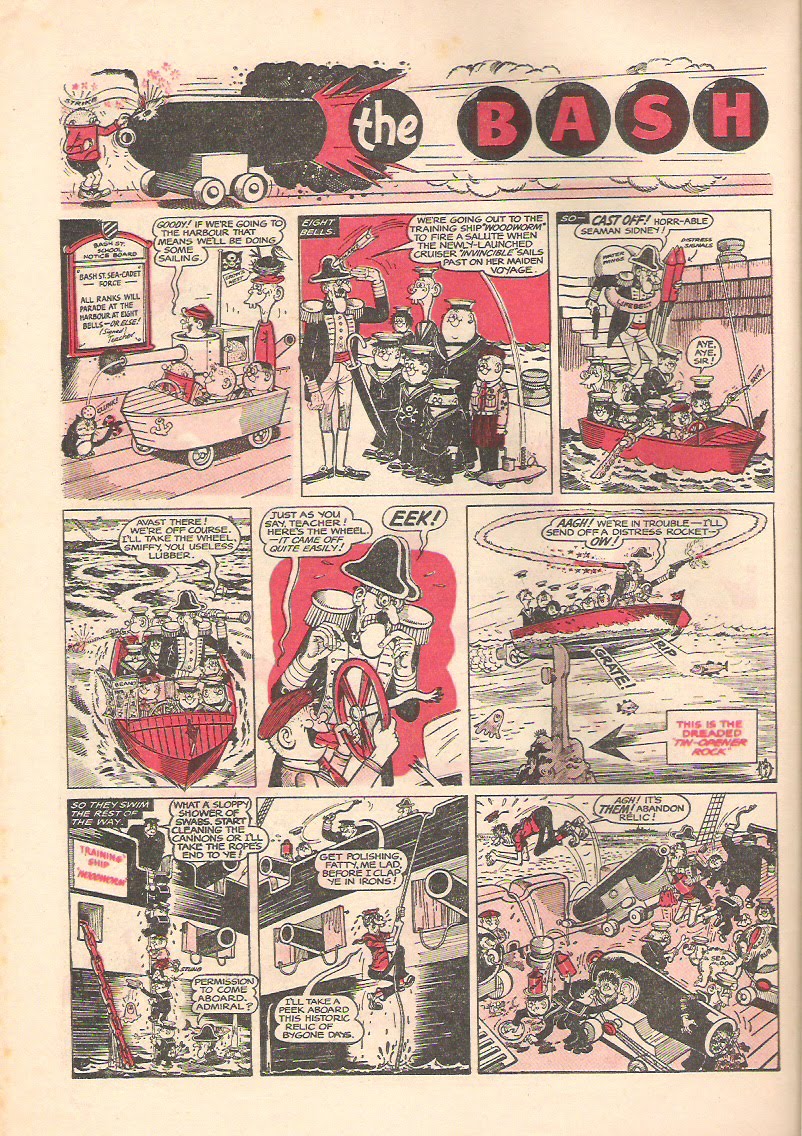 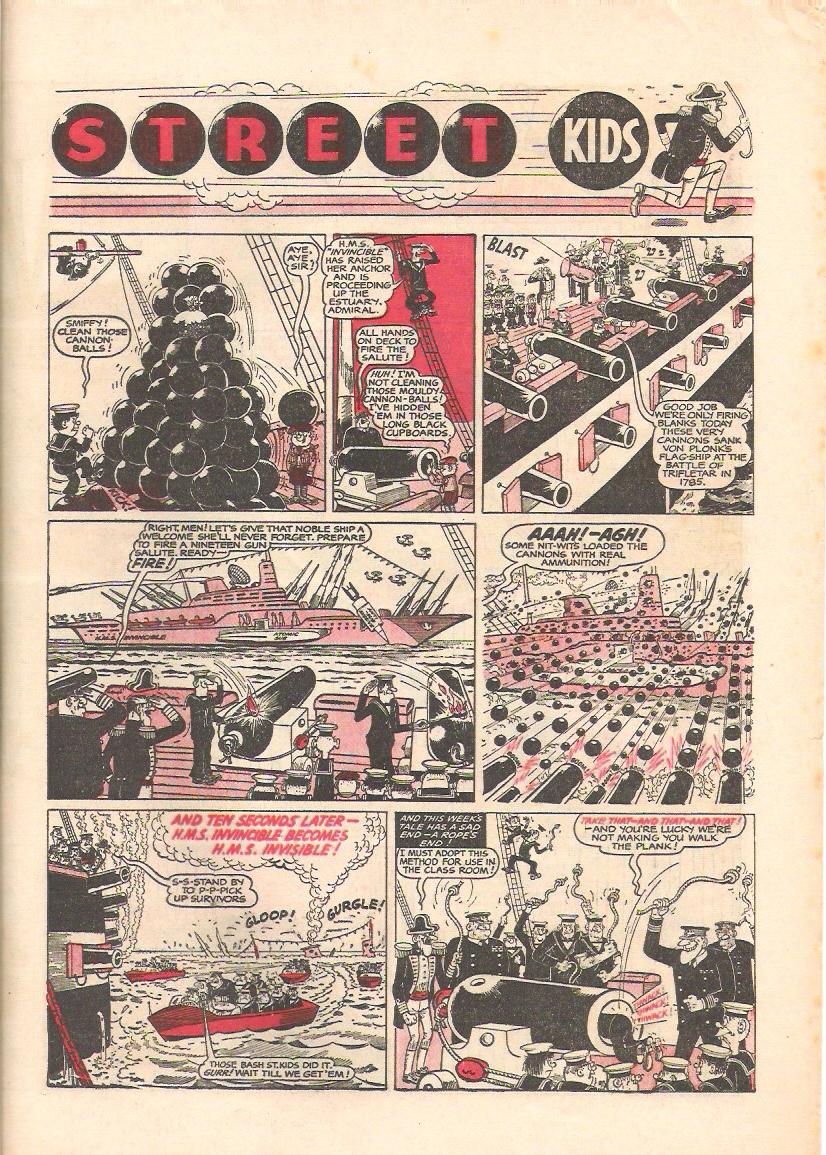 This is the one I thought was by David Sutherland in 1962..its by Leo..it can be very difficult to tell apart sometimes..shows the high standards of David..

I'm probably late to the party here, but I just realised (and don't think anyone else has pointed out yet) that this means he'll have been drawing the strip for half a century in four months' time.
Help! Help! We're being held prisoner in a signature factory!
Top

On the diminishing numbers of Class IIB I think it's worth pointing out that Leo was originally influenced by the terrifying hordes of children that were forever lying in wait to ambush unsuspecting adults in the cartoons of Giles (seen here on the cover of the 1957 collection). The point about these urchins is that they always appeared endless and interchangeable, like waves of old-style 'redskins' bearing down on defenceless settlers in the American West.

While Leo did introduce most of the named characters, Dave Sutherland went even further in humanizing the Kids by showing each member of the class as a recognizable, sympathetic individual (an approach that the text stories printed in The Wizard had also taken). In time it even became possible to care about Teacher himself.

Actually, Leo Baxendale himself claims credit for the reduction in class size:

One of the first Bash Street stories had them visiting an army display in the local park - and I had them defeating the British army and carrying off the heavy weaponry. In the background, you could see the kids shelling Bash Street School - a whole rabble army of Bash Street kids. I realised then that I would need to get rid of most of them - bring them down to a small group so that they could get close to the readers. That was when they first got their names: Plug, Smiffy, Wilfred and the rest.

While we're at it, here it is out of the horse's mouth on the subject of whether Cramond "handed Baxendale his notice" in 1962 or not:

His subsequent Beezer work (which I assume was just the Banana Bunch) must've been either stockpile, reprint, or freelance then.
Beano and Dandy Comic Libraries and Fun-Sizes list

Digifiend wrote:His subsequent Beezer work (which I assume was just the Banana Bunch) must've been either stockpile, reprint, or freelance then.

He was always freelance, and did new stuff for the Beezer from then on: The Banana Bunch and The Gobbles, plus some annual work; he was also offered strips in Topper and Dandy which didn't inspire him and he didn't want to do. It was when he asked to return to The Beano after about eighteen months, and was told he'd never work for the title again, that he looked for work with other companies instead of Thomson.
Top

dishes wrote:
How about a complete list of his strips then?

Danny on a Dolphin
The Cannonball Crackshots
The Great Flood Of London
The Bash Street Kids
Lester's Little Circus
General Jumbo
Billy the Cat
Biffo the Bear
Dennis the Menace
Gnasher's Tale/Gnasher and Gnipper
Rasher
The Germs
Korky the Cat
Bradley Bedsock (was that his name?)
Fred's Bed

Any more? And were they all for The Beano except Korky and Bradley?

According to the History of the Beano he also drew the shortlived Oscar Knight - Child Actor from 1992-1993.
Top

Regarding the various strips David has drawn, I'm surprised nobody has mentioned he did the second version of Jak in the early 2000s (not sure about dates in the comic, but his version did appear in the 2002-2005 Dandy Annuals - after that it was Wayne Thompson's version). He also drew The Nibblers and The Three Bears in the 2012 Beano Annual, though I'm far as I'm aware he hasn't drawn either in the weekly comic.

I agree with dishes in saying that David shouldn't be criticised for lacking a distinctive style of his own - as you said, his later work was very much in his own style, particularly on Dennis the Menace. I'd say that the influence of Leo Baxendale on Tom Paterson's work is more pronounced that than of any artist on Sutherland's style from the 1980s onwards, yet I certainly wouldn't accuse Tom of lacking a distinctive style.
'Michael Owen isn't the tallest of players, but his height more than makes up for it' - Mark Lawrenson
Top

Dave also drew 'Oscar Knight - Child Actor' which was then reprinted in The BeanoMAX very early on - I'll try and find some scans.

Dave also drew the one-panel gag, 'Creature Features' for the Dandy Book 2001. (What a weird annual that was!)

Not only that but he also drew the covers and splash pages of the Beezer Annual 2003. I can't remember if any of his stuff actually featured inside - but I don't think it did.

I think that's all. Of course, he also drew the 'At Home with the BSK' mini-strips for the Summer Specials but I guess they count as 'The Bash Street Kids'.

Jak II would've been in the Dandy around 2001-2003. Jak and Todd debuted in the 2004 Dandy revamp.
Beano and Dandy Comic Libraries and Fun-Sizes list 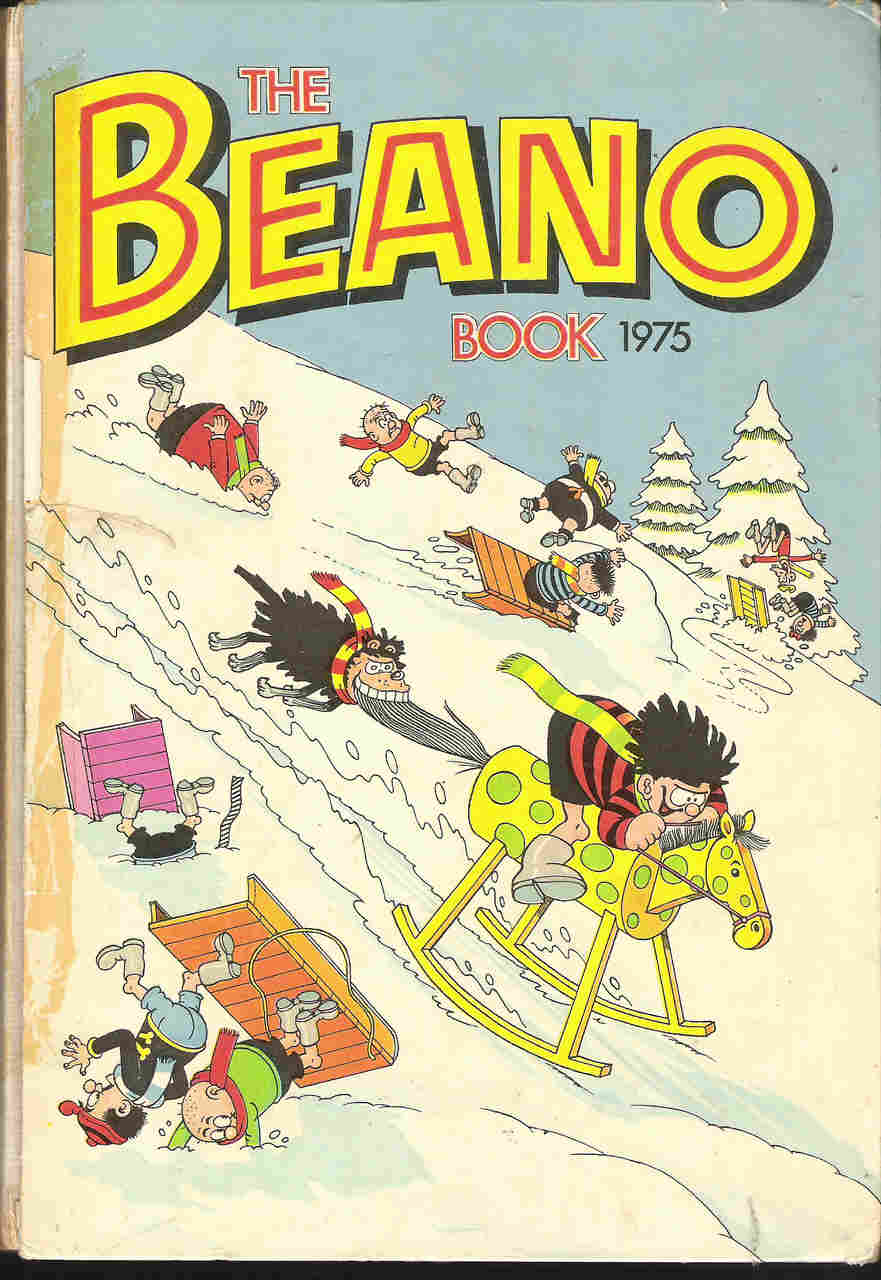 Heres my signature of David...I do like his work a lot..

A very nice selection of Dave's work Peter. You must be very proud of the signed self-portrait - do you know who the other people are based on? His appearance certainly has altered since this representation of the Bash Street Artist was printed in 1966! I really hope you get to meet him in person some day.

I'm hoping my wife will come round to the idea of a holiday in Scotland..