Spurs to finish in the top four.

I wonder, bri, if we could persuade you to outline the reasoning which led to your use of such a gratuitously offensive word.
Top

guru if u are offended by the word yid i apologise it was notr intended to cause u offence if you are jewish but i was under the impression this thread was a light hearted thread started by a tottenham fan for tottenham fans,who all know we use the word yid army for ourselves in a light hearted way.it is a well known fact that spurs have a large support within the jewish community and have always had jewish ties since early 80s when our chairman and a few board members was jewish.other teams supporters call spurs fans yids ie arsenal fans that is why we say yid army and are not offended .this country has gone way down hill with its Pc brigade without worrying about the word YID.its all banter.
Top

Both Jewish and non-Jewish fans of Tottenham Hotspur F.C. adopted "Yid" (or "Yiddo") as a nickname and "Yiddo, Yiddo!" as a battle cry and often identify themselves as "Yid Army". While such usage remains controversial, for the overwhelming majority of Tottenham supporters, it is used with pride. Some Jewish Tottenham supporters use it with a political consciousness of the club as a bastion against racism and antisemitism. Others use it simply due to the fact that many of the fans and owners of the club are Jews. However, the name was first given to the supporters as an insult, due to the large Jewish following at the club which is based close to the Jewish communities of North London. The sometimes racist chant "Yiddo" is used to taunt the club when playing as well. Opposition supporters also use repetition of the sound 'sss' to mock the sound of leaking gas, referencing to the gassing of the Jews in the Second World War.

The club, as with many clubs in London, has a large Jewish following and this led to much provocation of an anti-semitic nature against Tottenham supporters. Tottenham supporters, Jewish and non-Jewish, united against this and adopted for themselves the nickname Yids, developing chants to support this. Many of the fans view adopting â€œYidâ€ as a badge of pride, helping defuse its power as an insult. Today it is mainly used to distinguish fans from other football supporters. Many fans, however, disagree with the use of the name "Yid", and believe it will only attract more racism. A similar situation exists as regards fans of Ajax, from Amsterdam.

In short, some fans wear that name with pride, others see it as an insult. Best avoided IMHO.
Beano and Dandy Comic Libraries and Fun-Sizes list

Digi it's hard to avoid when you have other clubs fans screaming at you.

Phoenix
I did find it offensive to say Yid and didn't or still don't like it when other teams use it against us when it all started years ago but not so much now because as big bad bri says in aroundabout sort of way Spurs fans Jewish as well turned it around and are known as Yid Army they have T.shirts badges etc but does it make it right just because Spurs fans use it, maybe it's more a London thing.
Top

I meant that using the word as Bri did should be avoided. The tossers who shout racist chants in the terraces should be kicked out of the stadium and banned, to be honest.
Beano and Dandy Comic Libraries and Fun-Sizes list

big bad bri wrote:guru if u are offended by the word yid i apologise it was notr intended to cause u offence if you are jewish but i was under the impression this thread was a light hearted thread...this country has gone way down hill with its Pc brigade without worrying about the word YID.its all banter.

As steelclaw is well aware, bri, I am not Jewish nor do I support Tottenham, and I freely admit that I had no idea that the word was in common use among Spurs supporters. You are right to state that this is a lighthearted thread, but you are quite wrong to assume that just because the word is common currency down at White Hart Lane it is therefore not offensive. I'm sure that the issue of racism and the importance of learning how to combat it will have been raised at the school you attended. Were you listening?
Top

Digifiend wrote:I meant that using the word as Bri did should be avoided.

The word should not be used at all, Digi.
Top

Just heard that Malcolm Allison has died - I remember him on the Big Match and with his cigar and fedora. My team Millwall are away to Crystal Palace tomorrow -there will probably be a minute's silence - I fully expect the Lions fans to observe it. (But expect outrage from the press if they don't). My local paper says a crowd of 25,000 is expected.
Top

On reflection I think they will have a minute's applause.
Top

Sad to hear about Malcolm Allison's death, he was part of a great team at Man City with Joe Mercer in the club's most successful period. I wonder what they'd do if they were managing City now!

I'm glad that this Liverpool mess has been sorted out and Hicks and Gillett are gone, as they loaded the club with debt. We're not like Leeds or Portsmouth, who spent beyond their means, although failing to qualify for the Champions League last season didn't help of course. The new owners seem better than the previous ones (but that's not saying much). Back to football now hopefully anyway...

Liverpool don't seem to be in quite such a bad state as Dundee, who could easily go bust. You have to feel sorry for their fans.

With regard to Sunday's Merseyside derby, I think Kyrgiakos should play in defence, as his strength and heading will be useful in what is likely to be a very physical game. I'd also like to see Gerrard in the centre and Cole in the hole behind the striker (hopefully Torres if he's fit - his recent form hasn't been great, but remember form is temporary and class is permanent! However N'Gog is better these days so it's not as bad if he does miss out as it would have been a while back).
'Michael Owen isn't the tallest of players, but his height more than makes up for it' - Mark Lawrenson
Top

Big Mal was a great character and will be sadly missed
Who can forget his lucky fedora with his Crystal Palace days. 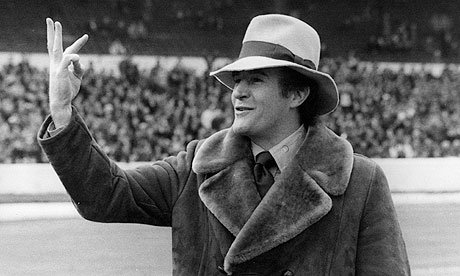 Yes, RIP Mr Allison and good riddance Hicks and Gillett. They were really destabilising Liverpool - the papers are saying it could be Man Utd next - the fans have been wanting Malcolm Glazer out ever since he bought the Red Devils.
Beano and Dandy Comic Libraries and Fun-Sizes list

Hicks and Gillet took the heat but Benitez was to blame. Look at the money the man has spent: Aquilani (Â£17M), Keane (Â£19M), Babel (Â£14M), Johnson (Â£19M for a RIGHT BACK!). Of course, he bought and sold a number of those, just like he bought and sold the likes of Peter Crouch, Bellamy and Pennant - sometimes for a profit (sometimes not). But is that what Liverpool fans want? There was no desperate need for an extra 1 or 2 million here and there. He had the funds to build a strong first team. Instead, he fiddled around here and there but couldn't get it right. He just didn't seem to know how to build a title winning side - at least, not for the English game.

It's been two decades now since Liverpool last won the league. I think Benitez has ensured they are further away from that than ever.
STARSCAPE
http://www.StarscapeComic.co.uk
Classic British reprints and all-new comics
Top

As a Red, even I have to agree with a lot of what you are saying.

I just don't think Aquilani is cut out for the English game, I he's a good player but too lightweight for the Premier League, and he wasn't the right man to replace Alonso - he's more of a Gerrard-type player than a deep-lying playmaker like Alonso.

Rafa didn't really want Keane, although I'm glad we signed him as it meant that we didn't get Gareth Barry, who we could have paid Â£18M for!

Babel could be a great player, but unfortunately his attitude seems to let him down. I think we need to give him a try as a striker, if it doesn't work we need to cut our losses and get rid of him.

I actually quite like Johnson but I agree we paid over the odds for him. Problem was Portsmouth were in financial trouble and hadn't paid us a lot of the Crouch money. If we'd signed him six months earlier we could have had him for about Â£9M.

I always liked Crouch and wish we still had him, as he would have been useful last when Torres was injured or unfit. Bellamy is a very good player and it's a shame that he's playing in the Championship now, given his form for City last season, but he didn't quite do it for us, though I think it's no coincidence that our best form in his on season at Anfield came when he was on form and scoring goals. Pennant was inconsistent though the one thing he did give us was a bit of width, which has been a problem of ours for years. So did Albert Riera but he let himself down with his attack on the club, although his descripton of us as a sinking ship probably wasn't too far from the truth.

I still like Rafa though for the fifth Champions League win, bringing players like Reina, Alonso and Torres to the club and he once signed my copy of the Beano!
'Michael Owen isn't the tallest of players, but his height more than makes up for it' - Mark Lawrenson
Top

Watched Score on the bbc red button, when Fulham scored Gabby Logan said that Spurs always win from going behind, as soon as she said it Spurs equalised. They went on to win.
Top
Post Reply
97 posts