currently on at the 'pictures':

by big bad bri
I'm waiting for the extended cut of batman vs superman i so wanted to enjoy it and i did but it wasn't what i thought it would be and found myself falling asleep in first hour,bear in mind i saw it as a double bill with man of steel which i enjoyed more, but my superman was Christopher Reeve and no one will come close as he was a true Superman at the end but these new films are more in line with the comic books.I really want to see the Captain America triple bill but fear i will fall asleep before civil war starts


I went back to see Supes v Batman and somehow I liked it better on the second sitting.


I too am looking forwards to the Captain America triple bill out at the end of the month.

They seem to do this sort of thing every year now and I always attend---great stuff!

those sodding blu-rays of the Cap films are far too expensive, though!

by big bad bri
my friend who i went to see batman v superman with also saw it a second time and he said it was much better 2nd time around so i guess im gonna have to put my cineworld pass to good use.

by ISPYSHHHGUY
yes the regular cinema tickets are a shocking TEN POUNDS each for adults, or TWELVE for 3-D FILMS which to me is totally extortionate.


The way I do it costs me just over a quid per film outing.

by ISPYSHHHGUY
On Tuesday I attended a double-bill screening of


Fantastic throughout, a real treat up on the big screen: it was packed, mostly with younger people not born at the time of original release. I spoke to some customers at the interval, and they all said they are tired of over-produced CGI and the older films are more natural-looking.


Tonight, I'm off to a TRIPLE-BILL Screening of the CAPTAIN AMERICA FILMS


and will be leaving for home around midnight! WINTER SOLDIER is one of my all-time fave rave films, ----- I am happy to see it for the umpteenth time--------and I look forwards to seeing the new one also [CIVIL WAR] : I will report back on this later this weekend.


Last night, I spent an unprecedented eight hours in the Multiplex watching the three Captain America films, and endured a treacherous trek home around 3 a.m.---it was well worth it, though.


Lots of references to the first two outings, this new one goes a slightly different route with more overtly comic tones, Stan Lee-like one-liners galore, with the usual almost non-stop mayhem so beloved of the MARVEL house style. WINTER SOLDIER is still my personal favourite--because it took itself a bit more seriously---and CIVIL WAR continues on from there, revealing the demonic manufacture of a cell of lethal uber-terrorists, out to de-stable the civilized way of life.


Perhaps just too many characters for it's own good in this third serving of the Cap, a highlight being an all-out slugfest in a carpark/airport [?] between multiple Super-heroes, that includes Spiderman and Antman.


Lots of the usual visual visual splendour we expect from this franchize, however the sense of menace is somewhat diluted by the laboured humorous overtones,----which is fairly relentless------ but full marks to the scriptwriters for at least trying a 'new' angle on the saga.


The younger crowd I saw this was loved this, and I'll be back for a repeat viewing.


FOUR OUT OF FIVE

Oh, 'Portrait of Jennie' is good. Haven't seen it for years but I remember it being very spooky. If you liked that, you might like 'The Lost Moment' from 1947. 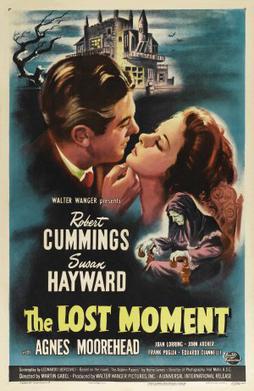 by ISPYSHHHGUY
I also like the best of 1930s films, and the 1933 KING KONG original version has been my all-time favourite film of all time for many years ; dammit, I even watched it again last night!


I also enjoy the cycle of Horror Films from Universal that started with Dracula and Frankenstein in the very early 30s.

Other 30s films I like are the James Cagney gangster films from Warners, I Was a Fugitive from a Chain Gang, the Busby Berkely Musicals [I kid ye knot!] the early Tarzan talkies, Devil Doll from M GM, and many, many more.


On the British front, London Films gave us the epic curio THINGS TO COME from 1936, a science-fiction extravaganza that has to be seen to be believed---stunning.

The late 30s of course also gave us Technicolor gems like Wizard of Oz and Snow White and the Seven Dwarfs.


The Max Fleischer POPEYE series began in 1933 and this has always been my absolute favourite series of animated shorts.


I had to send off to the USA for really clear versions of the POPEYE series---UK dvd collections are uniformally poor quality.

by colcool007
I went to see Captain America: Civil War today and I was genuinely impressed. I enjoyed it far more than Avengers: Age of Ultron. Won't post any spoilers but I thought there was a lot more character development in the Captain America movie than in the last Avengers one. 4.5/5 for me.

And to make up for not going to Granite City as I just can't face that much driving tomorrow, I bought 4 packs of Top Trumps Marvel, DC, 007 and Star Wars and the acrylic banner for Star Wars: The Force Awakens. All in all a pretty good day.

colcool007 wrote:I went to see Captain America: Civil War today and I was genuinely impressed. I enjoyed it far more than Avengers: Age of Ultron. Won't post any spoilers but I thought there was a lot more character development in the Captain America movie than in the last Avengers one. 4.5/5 for me.

I saw it in Ipswich yesterday, and was incrediby impressed. It did seem to be more of an Avengers movie than a Cap movie, though.

by starscape
Finally got to see Bats v Supes. I thought it was terrific. I can see why some would hate Batman with guns and such but, to me, it was an older, much more embittered Batman. So perfectly fine.

Yep, it was slow, dark and tense. But that all added to the character development. Bit of a surprise that they followed Doomsday all the way to the end mind you.

by colcool007
Well, I have just got back from Warcraft: The Beginning and I was genuinely surprised to find that I have enjoyed the full two hours. What was even nicer was that my wife who is a total World of Warcraft junkie managed to get through the film without being ready to kill anyone involved in making the movie. She spent 2 and a half hours ready to kill people after watching The Two Towers after Arwen was ready to go to the Grey Havens as that was not in the book and Arwen would never do that and I think you get the idea...

We watched the 3D version and for once, I actually enjoyed the 3D experience. It was well done, but I will say that panning shots in 3D hurt the eyeballs.

Solid performances by the whole cast, but the performance of the movie goes to Paula Patton as Garona. I would have loved to have said Toby Kebbell for Durotan, but she just edges him.

It is one of the best fantasy movies that I have seen in a long time and I would recommend it as a fantasy movie to any fan of the genre. A rock solid 4 out of 5 for me.

by ISPYSHHHGUY
There seems to be about 5 new films out this week, Col, but I will try and catch up with WARCRAFT.

by alanultron5
Must say that what spare cash I have goes on buying DVDs of old Hollywood films (Except when i'm upgrading Sparky's) Just got `Nothing sacred` Carole Lombard & Frederic March. Early technicolour comedy 1937.
All times are UTC+01:00
Page 26 of 29