I thought we could maybe use a thread to recommend non-British comics.

Top of my list to recommend to anyone is a Japanese series called Yotsuba&! 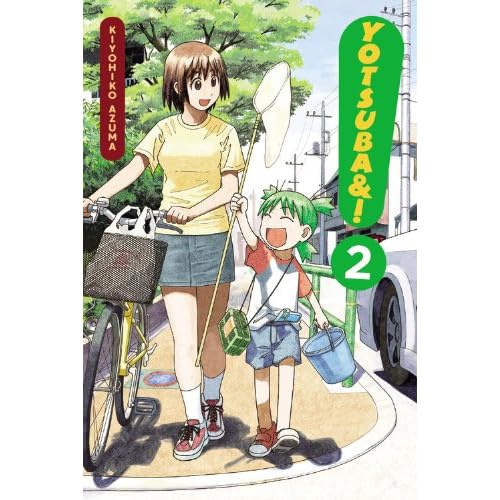 It's a little difficult to describe without sounding banal, because the plots of the stories are the least important thing about it. Yotsuba is a little girl who lives with her father. I think she's supposed to be about five or six. The series follows her about as she makes her way in the world, not always quite understanding what's going on. It's pure slice of life, but often hilarious, with a great cast of characters. The 240 page paperbacks are beautifully drawn, and the stories told at a leisurely pace, so that each volume may only include three actual stories, and those stories might be 'Yotsuba goes for a ride on her bicycle', or 'Yotsuba visits a farm and meets a cow', but you enjoy every page of them.

The same writer/artist, Kiyohiko Azuma was previously responsible for the school humour strip Azumanga Diaoh, which is also excellent, but more bitty, as it's largely constructed from four panel gag strips, interspersed with longer stories.
The Tammy Project: Documenting the classic British girls' comic, one serial at a time.
Top

That reminds me of Kikujiro a film by one of my favourite film makers Takeshi Kitano. Where he escorts a little boy back to find his mother and amusing incidents happen on the way. Not only does Kitano star in films he often writes, edits and directs them too. They are very slow paced. Zatoichi is a masterpiece - watch the final tap dance on youtube - sheer joy.
Top

I understand the problem many on Comics UK have with all those American superhero comics and I read very few modern superhero titles but, there are some American comics currently that are highly entertaining and not a superhero suit in sight. As these are my taste, I don't expect them to necessarily appeal universally but, here goes. Near Death from Image is a good take on the hitman turned protector with well written stories and art that suits and doesn't get in the way.
http://www.imagecomics.com/series/212/Near-Death
The Activity from Image - http://www.imagecomics.com/comics/4445/ ... vity-1-MR-
All Star Western from DC has the bounty hunter Jonah Hex cleaning up Gotham - dark, violent, corrupt and needing more than a good talking to.
But I want to finish with a superhero title. Mud Man by Paul Grist
http://www.imagecomics.com/comics/4367/Mudman-1-MR-
Simply well done good fun and a bit deeper than you might imagine. Have a look at them in your lcs - just don't get thrown out for reading not buying.
Top

It's interesting to see that DC Comics have just released one of their giant, black & white 'DC Showcase' collections of the 1980s comic book Amethyst, Princess of Gemworld to tie in with the character's reintroduction to the 'New 52' universe. Though it's a long time since I last read it (I've got the whole set somewhere) I remember this as one of the very few American series that wouldn't have been entirely out of place in a British girls' comic. To my mind writers Mishkin and Cohn (along with artist Ernie Colon) pulled off a minor miracle by writing a highly imaginative fantasy tale for girls, then disguising it as a super-hero tale (it isn't at all!). I'm really tempted to buy this book - my only worry is that I'll discover my original estimation of its worth was hopelessly flawed. It's also interesting to note that the new version of Amethyst which just debuted in Sword & Sorcery no.1 is scripted by none other than Chirsty Marx, one of the few female writers to make her own mark on American comics during the 1980s - firstly in partnership with Roy Thomas and Steve Gerber, and then on the excellent Sisterhood of Steel, which was tragically cut short after only eight issues owing to a disagreement about censorship. It's a bit too early to say whether her 'Amethyst' can match up to such past glories, but so far I'm keeping my fingers crossed!

They'll probably turn her into a balloon-chested superheroine with a dark tragedy in her past, if my pessimistic attitude towards modern American comics is anything to go by.

Anyway, recently there was an IDW 4-issue series featuring Star Trek: The Next Generation and Doctor Who. Though I only have parts 1 and 3. Really ought to ebay the rest! Anyway in part 3 there's a side-story where the fourth Doctor meets the original Enterprise crew, and fights retro Cybermen, defeating them with gold dust!

And while we're 'ere:

Bakuman: This is about some kids (though they grow up through the series, which moves faster than real time. In the latest book they've just had the 2016 new year's party) who want to create a hit comic that will be animated, so that the artist's girlfriend can voice-act in it. And then they can get married. That basic plot is very weird, but the actual story gives a lot of insight into how comics in Japan work (with allowances for dramatic licence, anyway), also there's some great supporting characters. Oh and the artwork is absolutely fantastic, and very detailed.

Genshiken: This is a bit weird, it's currently being released in 3-in-1 wedges of book. The artwork is pretty detailed but the style takes some getting used to. It's about a club at a Japanese school (the schools there seem to have loads of after school clubs dedicated to all sorts of sports and activities, as adults work really long hours it keeps the kids occupied) which is dedicated to "the appreciation of visual culture". Every character has their own facet of nerdiness, one likes making Gunpla (just think Airfix, but robots), one likes videogames, one likes costumes and so on. Anyway, the girlfriend of one character is normal and wants to ruin the club to "save" her boyfriend, but ends up getting more and more into it. The club also produces it's own comic, but that's not really focused on. Several of the characters are also a bit pervy, with big collections of pornographic comics and games, though you don't actually see anything!
1910 Press / British Comics Miscellany
Top

The Doctor Who/Star Trek comic had some nice bits but was ultimately let down by art that was good when taken directly from photo reference, but embarrassingly dreadful when not. Even the phot referenced art started to look a bit rushed toward the end.

There's an Amethyst cartoon now. Originally composed of shorts (which can be found on Youtube), they are now producing a full length series. It's absolutely the kind of thing that the comic should have been: a fun anime-style magical girl version with a flying horse, aimed at twelve year old girls.
The Tammy Project: Documenting the classic British girls' comic, one serial at a time.
Top

At the comic fair yesterday I noticed a black and white Amethyst Showcase collection. I bought Wonder Woman and World's Finest volume 4 of each.
Top

Recently on Comixology, I found Bandette and thoroughly enjoyed the 3 issues. Echoes of Fantomette but more adult. Also I bought a paper copy of Black Beetle #0. A retro, pulp style comic. Good enough to make me order the limited issue series from my lcs.
http://www.comixology.com/search?search=bandette
There doesn't seem to be a paper version, so you have to read it on your tablet.
Top

Yes, Bandette's a lot of fun, and real cheap. Though according to the artist, Colleen Coover, a lot less based on Fantomette than you might imagine, given the name and the costume basically being a colour flipped copy of Fantomette's. Apparently since neither she nor the writer speak French they've never read any.
The Tammy Project: Documenting the classic British girls' comic, one serial at a time.
Top

Thank you, Marionette, I didn't know that.
I also bought the first 2 issues of Masks on Comixology but got a bit scunnered with them. The characters seemed more like typical Dynamite re-treads than the classic originals and that annoyed me. Dynamite ruined The Phantom imo. and their treatment of The Black Bat, and possibly Zorro, in Masks looks like it could ruin those 2 as well.
I got round to reading vol.1 of Time bomb by Paul Gulacy , mainly because I enjoy his art and it was entertaining. I now have the other 2 episodes from Comixology.
Top

The word is that the new Amethyst series has been cancelled after only four issues. At the same time an Amethyst cartoon is announced.

My guess is that we may well see the launch of a new Amethyst comic shortly, which is more in line with the TV show, and IMHO how it should have been handled in the first place, as a light magical girl type series with flying horses, instead of the dour, continuity heavy approach they opted for.
The Tammy Project: Documenting the classic British girls' comic, one serial at a time.
Top

I visited my lcs. today and, wonder of wonders, the latest Mud Man was in my standing order box. Being a bit selfish here but it's a pity Mr Grist is so slow. Fortunately, it's worthwhile waiting for a comic that is so entertaining. Among the other titles, the latest Peter Panzerfaust (Image Comics), which is worth a look, imo.
Our library now has the Cine Books line available and I have read the first few issues of IRS, the first Lady S, a couple of Blake and Mortimer adventures and quite a few others. Enjoyable, so support your local library.
I'll still be investigating the sites offering digital French and Belgian B.D. Some titles that I have sampled intrigue me and I will certainly sign up and buy a few.
Top

If you go to the English page of Izneo:-
http://www.izneo.com/
there is the availability of "hiring a book for 10 days for a couple of Euros. Good idea if you don't want to keep it, but fancy a read. Better still to go to your local library and request the books. That's what I did and there are a number of them now on the shelves.
Top
Post Reply
13 posts • Page 1 of 1