A phenomenon that may have passed you by unless you read Spider-Man comics or follow a lot of sites that cover American comics is the unexpected return to the spotlight of Gwen Stacy. Originally the quintesential Girl in the Refridgerator, Spider-Man's girlfriend who was murdered by the Green Goblin back in the '70s to give the hero something to angst about ever since. Unlike most long-lasting characters in superhero comics she was never resurrected (though she was cloned that one time), she just hung around in Spidey's background as a reason to make him miserable.

Then last year Spider-Man did a story which featured a lot of different variations on the Spider-Man theme from different parallel universes, and one of them was a universe where it was Peter Parker who died and Gwen got the spider powers. The short solo story that introduced her was incredibly popular. A real girl band youtubed a version of a song featured in the story, and altogether it created so much buzz that Marvel took the unlikely step of listening to the fans and gave this one off character her own comic. The bizarre thing was that the same storyline had always been intended to introduce a character to be spun off into her own series, Silk, but she's been pretty much overshadowed by the unintended success of a comic that they actually ended up calling Spider-Gwen (she's actually known as Spider-Woman in the story, but Spider-Gwen was what the fans called her).

Marvel seem to have embraced their unexpected good fortune to the extent that in a couple of months they are going to run a series of Gwen-themed variant covers for many of their other titles, with Gwen taking the role of whoever the hero of that comic is, including The Ingwenable Hulk, Gwenverine, not to mention everyone in The Agwengers and the X-Gwen. I think my favourite of the designs I've seen so far has to be from the Guardians of the Galaxy spinnoff, Gwoot. 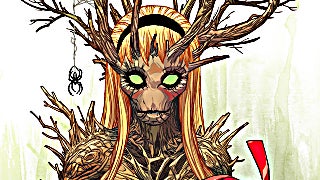 The Tammy Project: Documenting the classic British girls' comic, one serial at a time.
Top

Thank you for that precis Marionette.I knew Spider Gwen had risen in popularity, but I was unaware of where the story had come from or what the origin of it had been.
I started to say something sensible but my parents took over my brain!
Top

Thanks from me as well Mari. I'm afraid I've rather lost track of most US comics over the last few years, and while I can't help thinking of the female Thor as something of a gimmick I do regard the appearance of so many new female characters as a wholly positive development. The new Ms. Marvel has impressed me enormously by the way in which it has avoided all the old stereotypes of comic book superheroines so I'll be more than happy to give Spider-Gwen a try as well!
Top

The Spiderverse storyline that introduced her is one of the more fun events in comics, and included an anthology title Edge of the Spiderverse that focussed on different variations on the Spider-Man character (many of them entirely new). I particularly liked the steampunk Lady Spider, myself. Although I think they attempted to include every version of Spider-Man that has ever been created, you don't need to be a continuity nerd to enjoy it, although there are lots of references (including the Spider-Man from the 1960s cartoon meeting the one from the 1990s cartoon).

If you just want Gwen I'd recommend reading the initial short in Edge of the Spiderverse 2 and then skipping straight to the Spider-Gwen series. It's set outside mainstream Marvel continuity. Or at least it is until the whole Secret Wars/Battleworld event swallows it up along with everything else.
The Tammy Project: Documenting the classic British girls' comic, one serial at a time.
Top

I'm not even going to get into how many variations on "X-Men" titles there have been. Suffice to say there are currently four different ones running: X-Men, Uncanny X-Men, Amazing X-Men, and All New X-Men.
The Tammy Project: Documenting the classic British girls' comic, one serial at a time.
Top
Post Reply
6 posts • Page 1 of 1