A friend of mine has found a daily strip in Swedish newspaper Aftonbladet by Reg Smythe .
The strip is presented in the article below as starring Andy Capp's son.
The Swedish name of the strip is "Lill-Viktor och Lotta", (translated "Lil' Viktor and Lotta" –
Andy Capp's Swedish name is "Tuffe-Viktor", translated. "Tough-Victor")

Now, the only "son" we know of is "Buster" but this don't seem to be that one.
Does anyone here recognize this strip and maybe can tell us more about it? 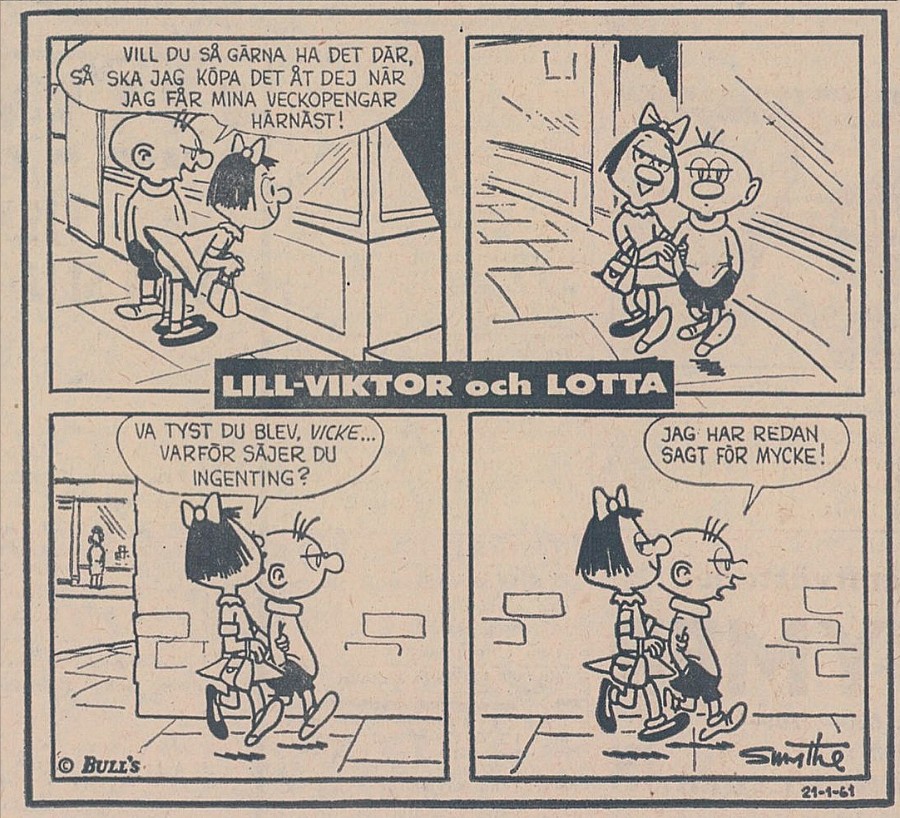 stevezodiac wrote: ↑
09 Jun 2020, 10:23
The copyright BULLS could suggest it was from John Bull magazine which was still going up to the early sixties. I've asked my mate Steve to check as he collects John Bull magazine and may also have Reg Smythe's biography.

It looks to me to be the "Bulls Pressetjeneste A/S" - see http://kingfeatures.com/contact-us/sale ... ts/europe/ - so the firm who published King Features materials
Top

stevezodiac wrote: ↑
09 Jun 2020, 10:23
The copyright BULLS could suggest it was from John Bull magazine which was still going up to the early sixties. I've asked my mate Steve to check as he collects John Bull magazine and may also have Reg Smythe's biography.

Sorry. I should have mentioned that Bulls are a Swedish print syndicate who, amongst other things, has the Swedish rights for various international newspaper strips.
Hence I'm inclined to think that the comic is a newspaper strip, rather than a feature in any comic.

Sad to say Bulls don't seem to have any archive or records of the strips they have had during the years.

Lill-Viktor and Lotta every week in AB [Aftonbladet]
Tuffa Viktor and Vivan have got a kid! The message spread terror and horror in the neighborhood. Lill-Viktor is now somewhere under ten years old. Besides, despite his father, he is quite kind. His best friend is the girl Lotta. He seldom happens to beat her. Rather, it is usually she who distributes the raw garbage. Lill-Viktor and Lotta come again in the Aftonbladet once a week.

They are created by British cartoonist Reginald Smythe. As a complement to Tuffa Viktor and to show a more idyllic side (well, moderately, of course) with the artistic author. Tuffa Viktor is, as you know, a deeply social person, aggressive, work-shady, lethal to ladies and totally impossible in a salon. Reginald Smythe is a refined gentleman, discreet, almost timid, in his way, always courteous to ladies, work ant (up to six Viktor drawings per day) and inhabit a classy 18th-century villa on the outskirts of London.

* Worried soul
- Tuffa Viktor is his spiritual valve and is allowed to do everything Reggie himself would want to do in gloomy moments, malicious friends claim. What sweet and pleasant Mrs. Smythe says about psychoanalysis does not tell the story. The now 40-year-old Smythe was previously a rather troubled soul who wandered around the earth not knowing what he was doing. In the absence of better he took recruitment in the British arm in the 1930s, became a civil servant after the war and began to sign seriously. Six years ago, Smythe joined the Daily Mirror and quickly became one of the world's most acclaimed cartoonists.

* In all countries
Tuffa Viktor was added a few years ago and struck tremendously. He is now found in all countries west of the Iron Curtain.
There have even been formed "Tuffa Viktor" clubs, where members adorn themselves with (?) Hats in the style of the idol. However, the statutes prohibit any wives from receiving the same unpopular treatment poor Vivan.

CAPTION:
TUFFA VICTOR'S DAD - the English cartoonist Reginald Smythe - has actually become a grandfather. Today, Tuffa Viktor's son, Lill-Viktor, makes an entrance in Aftonbladet. The work ant Smythe has been given a new figure to keep track of in his world famous series family.
Top
Post Reply
4 posts • Page 1 of 1