django wrote:Didn't see this in my local Smiths when I popped in earlier today, hope it'll be available round here...not like the Egmont Buster Special a couple of years ago where I had to do a lot of searching before I found it!.

i searched aload of shops in london for this & misty ,battle,rotr and i managed to find buster in belfast airport going to see my dad when i had given up all hope of getting & i wasnt really looking at that time i went in to buy viz,i still never managed to get the other 3 but buster was the main one i wanted anyway although it would have been nice to get the other 3.i take it they didnt sell well as they havent done any since.
Top 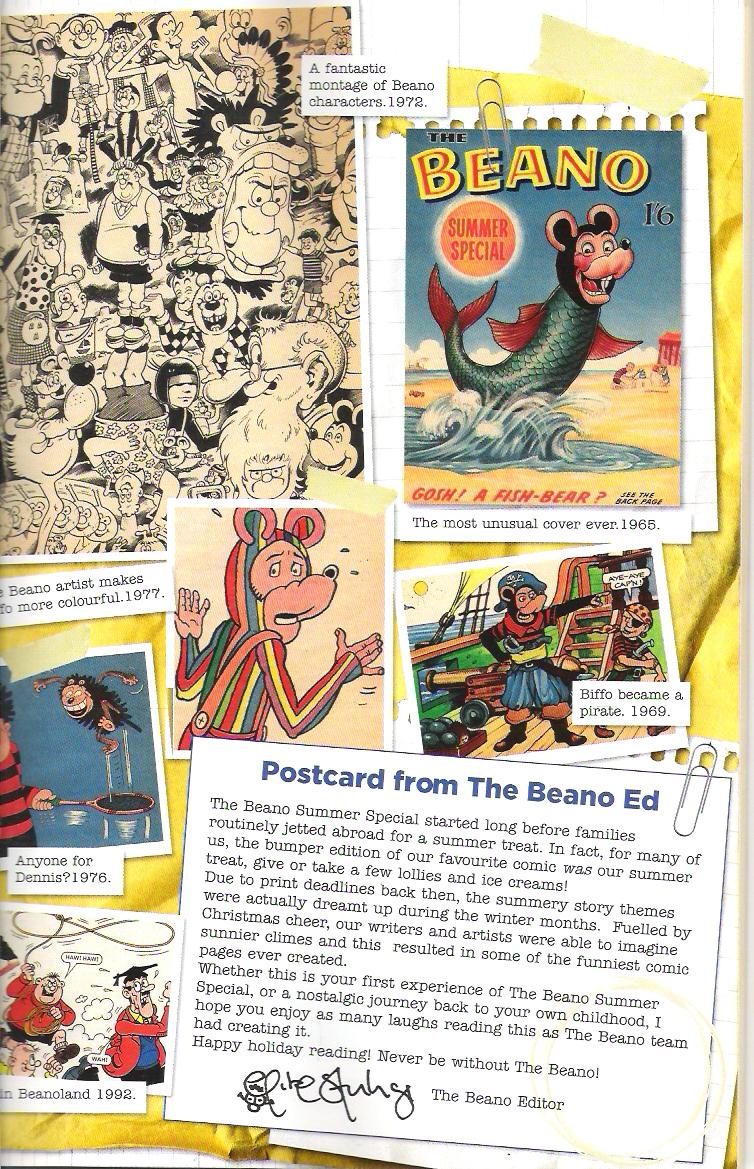 I better not show any more pages..
look forward to Lews review of it when he gets it..


I hope there will be a Christmas special number 2 this year...

Perfect point from the Ed about the Summer Specials being the holiday treat. I remember seeing the ads for them in Dandy and Beano when I was a kid and being told to wait until our annual holiday to Blackpool to buy them. Glad I did though. The smell of sea air and the cry of seagulls added to the experience, especially if you bought them from the open air news vendors at Talbot Square or along the prom (who are no longer there sadly).

Of course if it was chucking it down with rain you'd read them in the digs, but even then it was a magical experience to see your favourite characters at the seaside at the same time that you were.

Throughout my career I've always tried to do at least one seaside story every year, and, where possible, use Blackpool as the location or backdrop. I know it's not as relevant today but if just one kid visiting Blackpool that day buys the comic and gets a kick out of it as I did then it's worthwhile.
The blog of British comics: http://lewstringer.blogspot.com
My website: http://www.lewstringer.com
Blog about my own work: http://lewstringercomics.blogspot.com/
Top

I distinctly recall the Bob Nixon montage from 1972 [it sure stirred the memories] and the pirate Biffo story from 1969. I will buy this if I can,, as some of these items are very expensive elsewhere.

My bathroom walls are bedecked with saucy seaside postcards, which soothe my troubled brow during a relaxing bath....
a little too much information, perhaps...]
Baby Boomer Blog:

How many pages does it have?
Top

I am a happy bunny!, managed to pick this up in my local Smiths today. Thanks to the good Mr Gray the heads up!.
Top

If this is a "bookazine" as I suspect (still not seen it yet) and people can't find it it may be because those are often in their own section. The old Beano one (with the white cover, can't remember it's name) was.
Not going to my usual Smith's this saturday, but I'll see if Kings Cross has it!

Oh yeah, another possibility with the numbering is that there is going to be one based around the Dennis The Menace summer specials, and then one around the Bash Street Kids ones. I loved the map in the back of the first Bash Street Kids one, but I lost the special at some point.
1910 Press / British Comics Miscellany
Top

felneymike wrote:If this is a "bookazine" as I suspect (still not seen it yet) and people can't find it it may be because those are often in their own section. The old Beano one (with the white cover, can't remember it's name) was.

Got one. Sounds like the "bookazine" format you mention. It's a 64 page softback A4 book, so really a book about old Summer Specials rather than being one itself. It's packed with strips though.

Yes, it was in its own section, in a display at the end of the shelves beside the new Doctor Who and Marvel partworks. I imagine that's where it's supposed to be but it'll be worth rooting around because staff at some branches are bound to put it at the back of the comics shelf.
The blog of British comics: http://lewstringer.blogspot.com
My website: http://www.lewstringer.com
Blog about my own work: http://lewstringercomics.blogspot.com/
Top

somebody is already trying to sell it on ebay for £9.95

Double the proper price... are they hoping people will think it's like the Beano-Dandy retro books?
Beano and Dandy Comic Libraries and Fun-Sizes list

10 quid---they can whistle for it!
Baby Boomer Blog:

I might as well buy it off ebay has it hasn't hit (Outer Mongolia) of Central London.
Top

What film is that shark clip from SC? It looks hilariously OTT. How big IS that shark to swallow a human being?