A simple question but perhaps not a straightforward answer. I'm a Black Bob fan and of course the wonderful "Very Best of Black Bob" book has a wealth of information on him, an expanded version of what was included in "The Art and History of the Dandy".

Both these sources say that Kelman Frost created the series, under the instruction of RD Low (following a discussion about Lassie Come-Home). The "Art and History" says that all 21 original prose stories were written by Frost.

Fair enough, except Wikipedia disagrees, with no mention of Frost. Instead, it says, under the Black Bob article,

"The characters were created by John Hunter (1903-1984), originally from Hawick, who worked as a journalist in Dundee, and then came to stay in Selkirk, living in a house in Elm Row, and owning a china and gift shop in Market Place. He wrote the original stories, which were then illustrated by DC Thomson's staff artist, Jack Prout."

This is similar to the content on https://blackbob.org.uk/, the Friends of John Hunter and Black Bob.

(Then again, the Wikipedia article also says, "Black Bob originally appeared as a text story in The Dandy in issue 280, dated 25 November 1944; in that story, Black Bob follows his owner's nephew who is playing truant and tries to bring him back to school." It doesn't sound right to me - the first episode introduces Bob, who's actually trying to find his way back home, having been kidnapped. The second part deals with him being "rescued" by a girl, then he gets into a fight with a dog in part 3... I don't yet have the remaining parts, but it's my long-term plan to acquire them! The overall arc is him trying to get home, though, not chasing a truant.)

So the question is - who's correct? Is it the former editor of the Dandy, or the fan site? It's unusual to see two completely different accounts of how a character was created.

I'd be interested in any thoughts people may have...
Top

I've checked the Dandy Monster Index and it agrees that his first appearance in 1944 is him getting home after being kidnapped. I think Wikipedia is just wrong about it. I wonder if they got the first prose story and first picture story mixed up. Checking the index again it says the first picture story was a picture version of the prose one, so thats not what happened.

Personally I'd trust the history of the dandy and the black bob book over that fansite. It seems odd that it doesnt mention Lassie at all which must have been a big influence on the story. it could also be possible that both are true that John Hunter helped write it...
Top

Tin Can Tommy wrote: ↑
10 Jun 2022, 21:52
Personally I'd trust the history of the dandy and the black bob book over that fansite. It seems odd that it doesnt mention Lassie at all which must have been a big influence on the story. it could also be possible that both are true that John Hunter helped write it...

Thank you - yes, I'm inclined to believe the official history, but it's a lot of effort to go to (even erecting blue plaques) by the fan site.

I'll email them over the weekend to see what they say. Perhaps I won't be the first to ask!

In the meantime, here's a rarity from my collection - a photograph of a page from the Weekly News in 1955. It's Black Bob paired with Dennis the Menace... 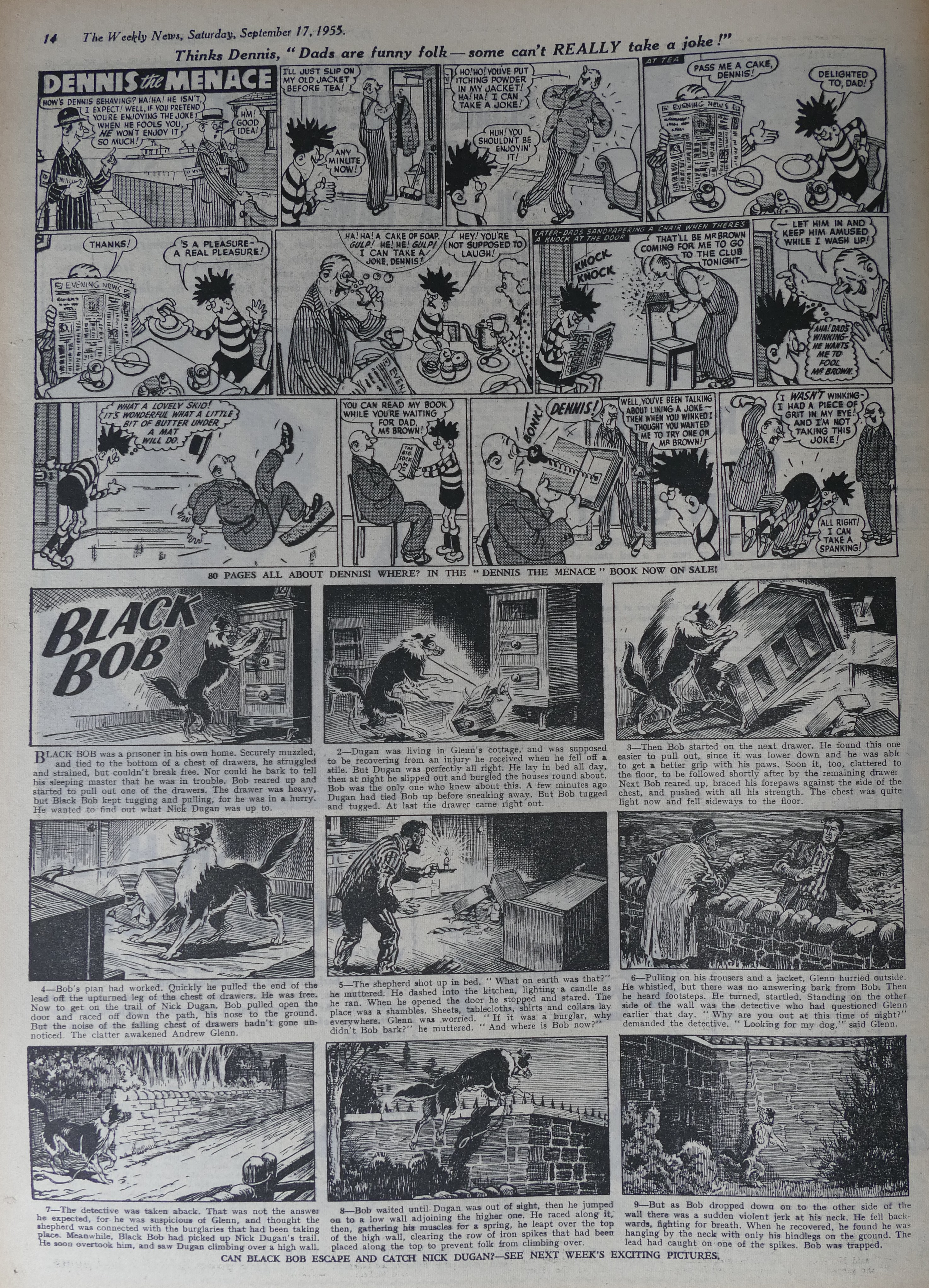 That Dennis story was reprinted in the 1970 DtM book.

The story on their Facebook page doesn’t add up. Prout would have been commissioned directly by DC Thomson, and the script editing would have been done by Dandy staff before being sent to Prout.